A carefully selected Top 10 list of the best courage quotes to inspire you on this magnificent whirlwind journey of life. 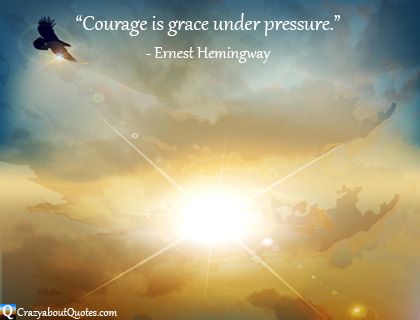 You know you've made it this far in life; then you know there's a deep well of courage already inside of you, waiting to be drawn from whenever needed. Sometimes one more step forward in the right direction is all that's needed to succeed.

"Courage doesn't always roar.
Sometimes courage is the little voice at the end of the day
that says I'll try again tomorrow."

"It takes a lot of courage to show your dreams to someone else."

"We gain strength, and courage, and confidence
by each experience in which we really stop to look fear in the face…
we must do that which we think we cannot."

"Courage isn't having the strength to go on -
it is going on when you don't have strength."

"Courage is resistance to fear, mastery of fear, not absence of fear."

"Courage and perseverance have a magical talisman,
before which difficulties disappear and obstacles vanish into air."

"Courage is found in unlikely places."

"What would life be if we had no courage to attempt anything?"

"It’s the hardest thing in the world - to do what we want.
And it takes the greatest kind of courage."

And the best of the rest…

"Who could refrain that had a heart to love
and in that heart courage to make love known?"

"I know what I want, I have a goal, an opinion, I have a religion and love.
Let me be myself and then I am satisfied.
I know that I’m a woman, a woman with inward strength and plenty of courage."

"Courage: the most important of all the virtues because without courage,
you can't practice any other virtue consistently."

Return to Quotes about Life Page
from courage quotes

An Inspirational book from Simple Truths...