A Top 10 of the best inspirational Abraham Lincoln quotes and some background information on this revered figure from American history. 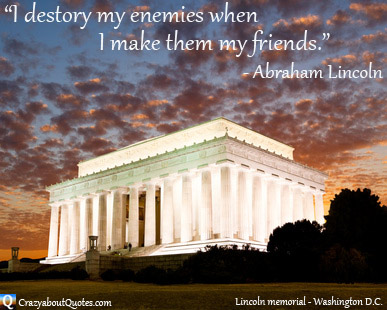 Profile: Lincoln was born in 1809 to a poor family in Kentucky, but grew up in Indiana. He had little schooling but pursued his personal development through reading. However it was in Illinois that his life began to change, when he enlisted for the Black Hawk War and was elected captain of his company.

On returning home he entered public life, gaining election in 1834 to the state legislature. He also successfully studied law during this period earning himself the nick name Honest Abe. He was married in 1842 and in 1846 Lincoln was elected to the U.S. Congress.

Lincoln joined the republican party in 1856 and rose quickly, opposing slavery and winning respect in a series of debates.

In March 1861 Abraham Lincoln began his presidency of the United States, war broke out less than two months later. His emancipation proclamation in 1862 effectively associated the war with freedom from slavery. Five days after victory was obtained Lincoln was shot dead by an assassin.

Abraham Lincoln is considered by most to be one of the greatest presidents. Despite many set-backs and failures, militarily and personal, he persevered to success showing great vision, honesty and skill in his leadership.

"Always bear in mind that your own resolution to succeed,
is more important than any other one thing."

"We live in the midst of alarms; anxiety beclouds the future;
we expect some new disaster with each newspaper we read."

"Most folks are about as happy as they make up their minds to be."

"Give me six hours to chop down a tree
and I will spend the first four sharpening the axe."

"It has been my experience
that folks who have no vices have very few virtues."

"I can see how it might be possible
for a man to look down upon the earth and be an atheist,
but I cannot conceive how he could look up into the heavens
and say there is no God."

"I am satisfied that when the Almighty wants me to do
or not do any particular thing,
He finds a way of letting me know."

"Whatever you are, be a good one."

Here are two more Abraham Lincoln quotes
I feel are worth highlighting and keeping together...

"In the end it is not the years in your life that count.
It is the life in your years."

"The things I want to know are in books;
my best friend is the man who'll get me a book I ain't read."

"Better to remain silent and be thought a fool
than to speak out and remove all doubt."

"Things may come to those who wait,
but only the things left by those who hustle."

"Whatever you are, be a good one."

Take a 'Look Inside' Lincoln on Amazon...