Mohandas Gandhi was a unique leader and truly lead by example, his legacy will live on as an inspiration for many many generations to come. Enjoy and be inspired by this Top 10 list of Gandhi quotes. 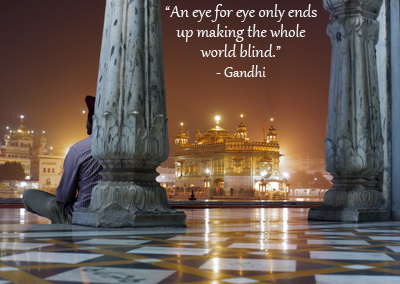 Profile: Mohandas Gandhi, was born 2nd October 1869 in Porbandar, British India. He was married at 13 and became a father at 15 but the child died after only a few days (his father died same year). Gandhi went on to have four sons.

Gandhi studied law in London and returned to India where his attempts at law failed because he was too nervous to speak in court.

The turning point in Gandhi's life came in South Africa, where he faced discrimination. He was thrown off a train, barred from hotels and asked to remove his turban. These events influenced him to spend the next 20 years fighting injustice here.

By 1915 he became known as Mahatma Gandhi, meaning Great Soul. Gandhi returned to India in this year, were he became the leader of non-violent political resistance. He achieved his goal of Indian independence in 1947 but was shot dead on Jan 13th 1948 by a Hindu fanatic.

"Men often become what they believe themselves to be.
If I believe I cannot do something, it makes me incapable of doing it.
But when I believe I can, then I acquire the ability to do it
even if I didn't have it in the beginning."


"Strength does not come from physical capacity.
It comes from a indomitable will."

"An eye for eye only ends up making the whole world blind."

"The weak can never forgive.
Forgiveness is the attribute of the strong."

"You may never know what results come of your action,
but if you do nothing there will be no result."

"First they ignore you, then they laugh at you,
then they fight you, then you win."

"A man is but the product of his thoughts
what he thinks, he becomes."

"The best way to find yourself
is to lose yourself in the service of others."

"I claim to be a simple individual liable to err like any other fellow mortal.
I own, however, that I have humility enough
to confess my errors and to retrace my steps."

"Be the change that you wish to see in the world."

"A small body of determined spirits
fired by an unquenchable faith in their mission
can alter the course of history."

"Always aim at complete harmony of thought and word and deed.
Always aim at purifying your thoughts and everything will be well."

"My shyness has been in reality my shield and buckler.
It has allowed me to grow.
It has helped me in my discernment of truth."

In tribute to this great soul I'll leave you with the words of Albert Einstein...

"Generations to come, it may well be,
will scarce believe that such a man as this one
ever in flesh and blood walked upon this Earth."

Take a 'Look Inside' Amazon's offerings on Gandhi...