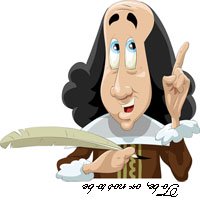 Even today many people still use William Shakespeare quotes in their everyday speech without even realising, which exemplifies the talents of this great playwright and poet.

Profile: Shakespeare was born in Stratford-upon-Avon, England in 1564. He married at 18 to a women 8 years his senior and they had 3 children. Around 1585 he went to London and his plays were on stage by 1592. He became a partner in the company called Lord Chamberlain's Men for which he produced most of his plays.

William Shakespeare retired back to Stratford some years before his death in 1616 aged 52. His works include about 38 plays and 154 sonnets. Shakespeare's plays have been translated into every major living language and are performed more than those of any other playwright.

The reasons for William Shakespeare's enduring fame lie in his ability to dig deep into human emotion and present it simply but eloquently, woven into a great human story about love, tragedy, comedy and so on. Enjoy.

"This above all; to thine own self be true."


"Be not afraid of greatness:
some are born great, some achieve greatness,

and some have greatness thrust upon them."

"My words fly up, my thoughts remain below:
Words without thoughts never to heaven go."

"They do not love that do not show their love.
The course of true love never did run smooth."

"Words are easy, like the wind;
Faithful friends are hard to find."

"There was a star danced, and under that was I born."

"Absence doth sharpen love, presence strengthens it;
the one brings fuel, the other blows it till it burns clear."

"Let me embrace thee, sour adversity,
for wise men say it is the wisest course."

"Love to faults is always blind,

always is to joy inclined.

and breaks all chains from every mind."

"It is not in the stars to hold our destiny but in ourselves."

"Better three hours too soon than a minute too late."

"There is nothing either good or bad but thinking makes it so."

"Who could refrain that had a heart to love
and in that heart courage to make love known?"

"When we are born we cry
that we are come to this great stage of fools."