If these Albert Einstein quotes don't fuel your mind then nothing will! The fact that the word genius is synonymous with Einstein really says it all. His thinking revolutionised physics, bringing us to a greater understanding of our universe. 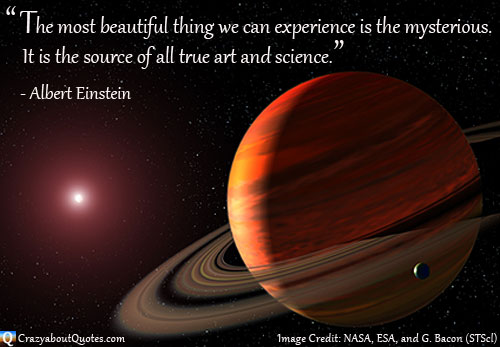 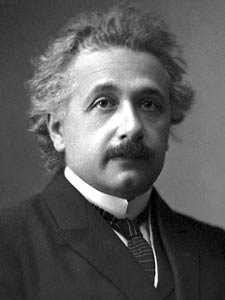 Profile: Einstein was born into a Jewish family in Ulm, Germany in 1879. In 1894 he moved to Switzerland and at the age of 16 failed the entrance exam for the Swiss Federal Polytechnic School but excelled in Physics and mathematics. He gained a diploma else where and was then admitted to the School the next year.

Einstein graduated in 1900 and was granted Swiss citizenship in 1901. He gained employment as an examiner at the patent office in Bern and was married to Marić in 1903, they had two sons but later divorced.

It was in 1905 age 26 that Einstein produced four papers that made him famous and brought much success, one of them being his theory of relativity, E = mc² is probably the most famous equation in the world.

In 1913 he accepted a professorship in Berlin until 1932. Becoming concerned with the growing anti-Semitism in Germany, on a trip to the America he accepted a position in Princeton, New Jersey where he remained until his death in 1955.

I have selected the best Albert Einstein quotes on a variety of subjects to give you an insight into this great mind and personality.

"Imagination is more important than knowledge.
For knowledge is limited,
whereas imagination embraces the entire world."


"I have no special talent.
I am only passionately curious."

"Only a life lived for others is a life worthwhile."

"I cannot believe that God would choose to play dice with the universe."

"It's not that I'm so smart, it's just that I stay with problems longer."

"How I wish that somewhere
there existed an island for those who are wise and of good will."

"If there is any religion that could respond to the needs of modern science,
it would be Buddhism."

"The important thing is not to stop questioning.
Curiosity has its own reason for existing."

"I am not only a pacifist but a militant pacifist.
I am willing to fight for peace.
Nothing will end war unless the people themselves refuse to go to war."

Here's an Einstein quote I hope you'll take the time to read...

"A human being is part of a whole,
called by us the Universe,
a part limited in time and space.
He experiences himself, his thoughts and feelings,
as something separated from the rest
a kind of optical delusion of his consciousness.
This delusion is a kind of prison for us,
restricting us to our personal desires
and to affection for a few persons nearest us.
Our task must be to free ourselves from this prison
by widening our circles of compassion
to embrace all living creatures
and the whole of nature in its beauty."

"The monotony and solitude of a quiet life stimulates the creative mind."

"Perfection of means and confusion of ends seem to characterize our age."

"The most aggravating thing about the younger generation
is that I no longer belong to it."

"Anyone who has never made a mistake has never tried anything new."

"I think and think for months and years,
ninety-nine times, the conclusion is false.
The hundredth time I am right."

"Life is like riding a bicycle.
To keep your balance you must keep moving."

Take a 'Look Inside' one of the greatest minds courtesy of Amazon...