A Top 10 collection of Galileo quotes. Galileo was a physicist, mathematician, and astronomer whom Einstein called the 'father of modern science'. Despite the resistance of his day he dared to lead the way in science, giving us a clearer understanding of our universe. 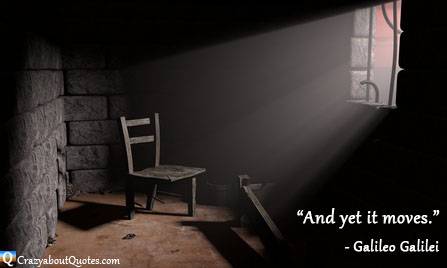 Profile: Galileo Galilei was born in Pisa, Italy in 1564. He studied medicine initially but his interest lay in mathematics and the physics and by 1592 his reputation had gained him a post at the University of Padua at which he spent 18 years.

It was around 1609 that Galileo first perfected the telescope and turned it towards the heavens. He discovered the mountainous surface of the moon, the incredible number of stars in the Milky Way, the moons circling Jupiter, all this of course confirmed his support for the Copernicus view of the solar system.

After he published his findings, the church in 1616 denounced the Copernicus system as dangerous to the faith and Galileo was summoned to Rome and warned not to teach his findings.

However in 1632 he published more on his work and was then tried by the Inquisition. Galileo was then forced, under threat of torture, to recant his views that the earth moved around the sun and was placed under house arrest. Where actually he produced some of his finest work, he died in 1642. It's said after he recanted, he was heard to mutter "And yet it moves."

"All truths are easy to understand once they are discovered;
the point is to discover them."

"I have never met a man so ignorant that I couldn't learn something from him."

"Where the senses fail us, reason must step in."

"The sun, with all those planets revolving around it and dependent on it,
can still ripen a bunch of grapes
as if it had nothing else in the universe to do.

"I do not feel obliged to believe that the same God
who has endowed us with sense, reason, and intellect
has intended us to forgo their use."

"If I were again beginning my studies,
I would follow the advice of Plato and start with mathematics."

"The Bible shows the way to go to heaven, not the way the heavens go."

"In questions of science, the authority of a thousand
is not worth the humble reasoning of a single individual."