A brief profile and Top 10 list of Nicolaus Copernicus quotes. 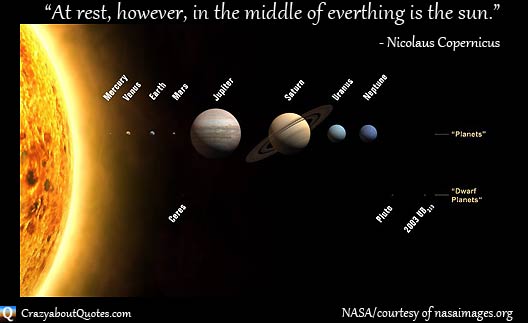 Profile: Nicolaus Copernicus was born in Poland in 1473. Around the age of 12 his father died and his uncle, who was a bishop, then took care of him.

Copernicus studied mathematics, astronomy, canon law, and medicine successively at several universities. Then with his uncle's influence was elected canon in 1497 thus providing him with an income and enabling him to pursue his interest in astronomy.

Copernicus formulated his idea that the earth moved around the sun (up until then the earth was seen to be at the centre of the solar system) some time before 1514 and had his system worked out by 1530 through observation and mathematics. However it wasn't until he was on his deathbed in 1543 that his work was published.

Nicolaus Copernicus was willing to think outside the box and challenge the thinking of his time which changed astronomy and the perception we had of our place in the universe.

"Therefore, when I considered this carefully,
the contempt which I had to fear
because of the novelty and apparent absurdity of my view,
nearly induced me to abandon utterly the work I had begun."

"For it is the duty of an astronomer to compose the
history of the celestial motions through careful and expert study."

"Not a few other very eminent and scholarly men made the same request,
urging that I should no longer through fear refuse
to give out my work for the common benefit of students of mathematics."

"At rest , however, in the middle of everything is the sun."

"For I am not so enamoured of my own opinions
that I disregard what others may think of them."

"Of all things visible, the highest is the heaven of the fixed stars."

"The massive bulk of the earth does indeed shrink to insignificance
in comparison with the size of the heavens."

"I can easily conceive, most Holy Father,
that as soon as some people learn that in this book
which I have written concerning the revolutions of the heavenly bodies,
I ascribe certain motions to the earth,
they will cry out at once that I and my theory should be rejected."

"Those things which I am saying now may be obscure,
yet they will be made clearer in their proper place."

That's all for now folks, thanks for visiting this Copernicus quotes page.

Return to
Quotes by