Sir Isaac Newton contributed immeasurably to humanity with his discoveries and is considered one of the greatest scientists ever. This is a Top 10 collection of the best Isaac Newton quotes. 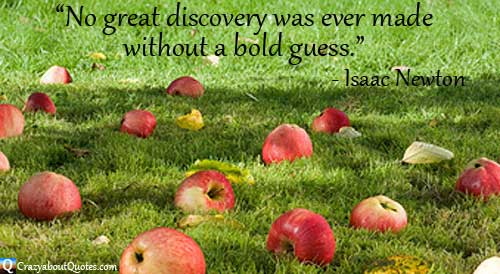 Profile: Sir Isaac Newton was born in 1642 in Lincolnshire, England. His father died before his birth and when his mother remarried he lived with his grandmother until age 10.

Newton excelled at school and was admitted to Trinity College, Cambridge in 1661. He was sent home when the college closed due to the plague in 1665. It was here in the seclusion and quiet of Lincolnshire that he made his discoveries in optics, the law of gravitation (yes, he did observe an apple falling from a tree) and developed his system of calculus.

At 27, Isaac Newton became professor of mathematics at Trinity and remained so until 1696 when he joined the Royal Mint. He was also made president of the Royal Society in 1703 and held both these positions until his death in 1727.

Sir Isaac Newton is buried in Westminster Abbey. It has been said that actually he wrote more about religion than science and was greatly interested in alchemy. (I could go on forever with this profile but you're here for the Isaac Newton quotes, right so i'll get on with it). Enjoy.

"If I have made any valuable discoveries,
it has been owing more to patient attention than to any other talent."


"I do not know what I may appear to the world,
but to myself I seem to have been only a boy playing on the sea-shore,
and diverting myself in now and then finding a smoother pebble
or a prettier shell than ordinary,
whilst the great ocean of truth lay all undiscovered before me."

"We build too many walls and not enough bridges."

"Yet one thing secures us what ever betide,
the scriptures assures us the Lord will provide."

"No great discovery was ever made without a bold guess."

"To me there has never been a higher source of earthly honour
or distinction than that connected with advances in science."

"To every action there is always opposed an equal reaction."

"Tact is the art of making a point without making an enemy."

"Trials are medicines which our gracious and wise Physician prescribes
because we need them; and he proportions the frequency and weight
of them to what the case requires.
Let us trust his skill and thank him for his prescription."