Seriously inspirational, amazingly successful, and justifiably loaded! Oprah Winfrey is one of a kind. Enjoy this brief profile and Top 10 list of Oprah Winfrey quotes. 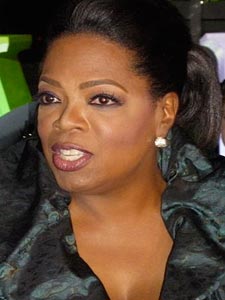 At 19 Oprah was hired as a reporter and anchor for CBS. But it was in 1984 when she accepted a post in Chicago hosting a morning talk show that her career really catapulted. In 1986 she formed her own production company. The last episode of The Oprah Winfrey Show aired in 2011.

Oprah Winfrey was successful as an actress in Spielberg's The Color Purple, with her book club, creating O - The Oprah Magazine and many other ventures. She is also a philanthropist, humanitarian, and was the first black women to become a billionaire.


All of which makes her one of the most influential women in the world. It's been a pleasure picking the best inspirational and motivational Oprah Winfrey quotes out for you. Enjoy. (Image Credit: Greg Hernandez)


"Excellence is the best deterrent to racism or sexism."

"I remember a specific moment,
watching my grandmother hang the clothes on the line,
and her saying to me, 'you are going to have to learn this,'
and me being in that space of awareness and
knowing that my life would not be the same as my grandmother's life."

"Real integrity is doing the right thing,
knowing that nobody's going to know whether you did it or not."

"The biggest adventure you can take
is to live the life of your dreams."

"The whole point of being alive
is to evolve into the complete person you were intended to be."

"Understand that the right to choose your own path is a sacred privilege.
Use it.
Dwell in possibility."

"What I know is,
is that if you do work that you love, and the work fulfils you,
the rest will come."

"When I look into the future, it's so bright it burns my eyes."

"Be thankful for what you have; you'll end up having more.
If you concentrate on what you don't have,
you will never ever have enough."

"I know for sure that what we dwell on is who we become."

"You know you are on the road to success
if you would do your job, and not be paid for it."

Take a 'Look Inside' Oprah on Amazon...