It's been said that he was the most intelligent and versatile man to hold the U.S. presidency. Enjoy this brief profile and Top 10 list of Thomas Jefferson quotes. 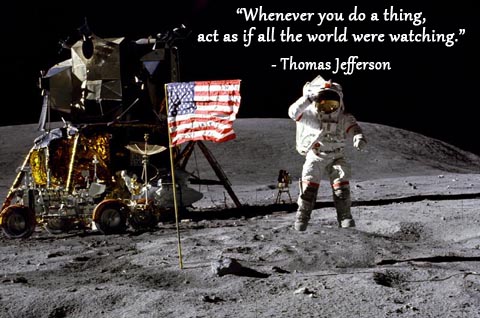 Profile: Thomas Jefferson was born in Virginia, U.S. in 1743. He had an excellent education becoming greatly interested in a scientific career but due to lack of opportunities studied law.

Jefferson practiced successfully then entered politics when he was elected to represent his County in the Virginia House of Burgesses in 1769. Having now made a considerable reputation for himself he became head of the committee to write the Declaration of Independence in 1776.

Thomas Jefferson considered quitting public service but after his wife's death in 1782 he entered Congress, then became minister to France in 84. And when George Washington formed his government Jefferson became Secretary of State in 1790.

In 1796 Jefferson ran for the presidency and lost to John Adams but became Vice President. And as you know went on to become the 3rd U.S. president in 1801 serving to 1809.

He died in 1826 age 83 on the 4th of July, 50 years after the Declaration of Independence and a few hours before John Adams.

Thomas Jefferson founded and designed the University of Virginia. He believed deeply in enlightenment through education and in the equality of all men. He wrote his own epitaph which sums up his values:

Here was buried Thomas Jefferson,
author of the Declaration of American Independence of the Statute of Virginia
for Religious Freedom and father of the University of Virginia.

1:
"Determine never to be idle.
No person will have occasion to complain of
the want of time who never loses any.
It is wonderful how much may be done if we are always doing."

2:
"Do you want to know who you are? Don't ask. Act!
Action will delineate and define you."

3:
"When angry count to ten before you speak.
If very angry, count to one hundred."

"Honesty is the first chapter in the book of wisdom."


6:
"To penetrate and dissipate these clouds of darkness, the general mind must be strengthened by education."

7:
"We hold these truths to be self-evident:
that all men are created equal;
that they are endowed by their Creator with certain unalienable rights;
that among these are life, liberty, and the pursuit of happiness."

9:
"Our greatest happiness
does not depend on the condition of life in which chance has placed us,
but is always the results of a good conscience,
good health, occupation, and freedom in all just pursuits."

10:
"Peace and friendship with all mankind is our wisest policy,
and I wish we may be permitted to pursue it."

"The glow of one warm thought
is to me worth more than money."

"I believe that banking institutions
are more dangerous to our liberties than standing armies."

"I cannot live without books."

"I believe that every human mind
feels pleasure in doing good to another."

"I like the dreams of the future better than the history of the past."

"I abhor war and view it as the greatest scourge of mankind."

Search for Thomas Jefferson on Amazon...