A collection of the best funny Christmas quotes around. Has the crazy Christmas rush started for you yet? Take some time out to enjoy this Top 10 that will hopefully give you a chuckle. 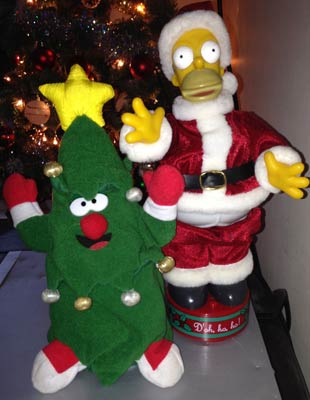 
"I once bought my kids a set of batteries for Christmas
with a note on it saying, toys not included."

"That's the true spirit of Christmas;
people being helped by other people other than me."

"What I don't like about Christmas parties is looking for a job the next day."

"In the old days, it was not called the Holiday Season; the Christians called it 'Christmas' and went to church; the Jews called it 'Hanukka' and went to synagogue; the atheists went to parties and drank. People passing each other on the street would say 'Merry Christmas!' or 'Happy Hanukka!' or (to the atheists) 'Look out for the wall!'"

"Christmas is a time when you get homesick - even when you're home."

"There's nothing sadder in this world
than to awake Christmas morning and not be a child."

"Santa is very jolly because he knows where all the bad girls live."

"The Supreme Court has ruled that
they cannot have a nativity scene in Washington, D.C.
This wasn't for any religious reasons.
They couldn't find three wise men and a virgin."

"Christmas at my house is always
at least six or seven times more pleasant than anywhere else.
We start drinking early.
And while everyone else is seeing only one Santa Claus,
we'll be seeing six or seven."

"Once again, we come to the holiday season -
a deeply religious time that each of us observes,
in his own way, by going to the mall of his choice."

"Santa Claus has the right idea. Visit people once a year."

"Two thousand years ago, the Holy family had a ramble from Nazareth to Bethlehem -
in much the same way as I'm having a ramble from Norwich to Swaffham.
Although I'm not comparing myself to Jesus -
I don't want to get bogged down in that whole controversy again."

Have a great Christmas folks!