Hi folks, here's a great collection of inspirational sports quotes I know you'll love. They all come from a variety of sporting heroes and legends. Use these quotes to fuel your mind and fulfil your goals. 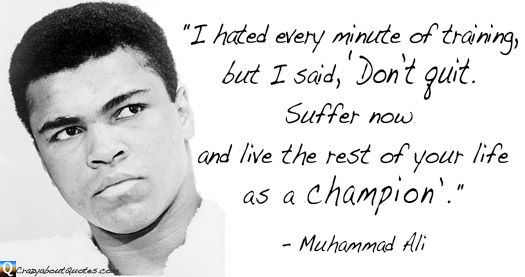 "I hated every minute of training, but I said, ‘Don’t quit. Suffer now and live the rest of your life as a champion." - Muhammad Ali (1942) : Heavyweight boxer

Make use of the comment box and let me know your favourites
oooooooor any great ones I've missed out. It can happen!

"I firmly believe that any man's finest hour,
the greatest fulfillment of all that he holds dear,
is that moment when he has worked his heart out in a good cause
and lies exhausted on the field of battle - victorious."

- Vince Lombardi 1913 - 1970
(American football player and coach:
Won 5NFL championships as coach of the Green Bay Packers, including the first two Super Bowls in 1966 and 67.)

"Never give up!
Failure and rejection
are only the first step to succeeding."

"For any top sportsman,
it requires more than ability,
it requires a belief in yourself,
a passion and a desire to get over the line."

"I’ve missed more than 9,000 shots in my career.
I’ve lost almost 300 games.
26 times,
I’ve been trusted to take the game winning shot
and missed.
I’ve failed over and over and over again in my life.
And that is why I succeed."

"There are only two options regarding commitment.
You’re either IN or you’re OUT.
There is no such thing as life in-between."

"You can’t put a limit on anything.
The more you dream, the farther you get."

"The will to win is important,
but the will to prepare is vital."

"I always felt that my greatest asset
was not my physical ability,
it was my mental ability."

"Pain is temporary. Quitting lasts for ever."

"The more difficult the victory, the greater the happiness in winning."

"Set your goals high,
and don't stop till you get there."

"If you have everything under control,
you’re not moving fast enough."

"To uncover your true potential
you must first find your own limits
and then you have to have
the courage to blow past them."

"Make each day your masterpiece."

"If you can believe it, the mind can achieve it."

"You have to expect things of yourself before you can do them."

"Always make a total effort,
even when the odds are against you."

"I’ve learned that something constructive comes from every defeat."

"Age is no barrier,
It's a limitation you put on your mind." 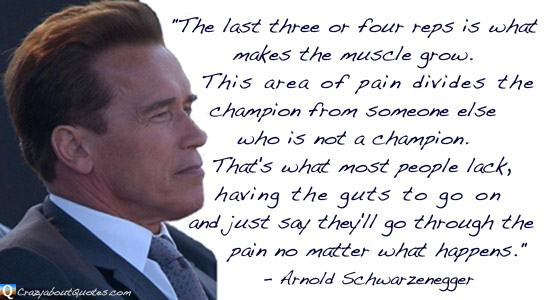 "The last three or four reps is what makes the muscle grow.
This area of pain divides the champion
from someone else who is not a champion.
That's what most people lack,
having the guts to go on
and just say they'll go through the pain
no matter what happens."

"An athlete cannot run with money in his pockets.
He must run with hope in his heart and dreams in his head."

"Just keep going.
Everybody gets better if they keep at it."

"Excellence is the gradual result of always striving to do better."

"Make sure your worst enemy doesn't live between your own two ears."

"You are never really playing an opponent.
You are playing yourself,
your own highest standards,
and when you reach your limits, that is real joy."

"Champions keep playing until they get it right." 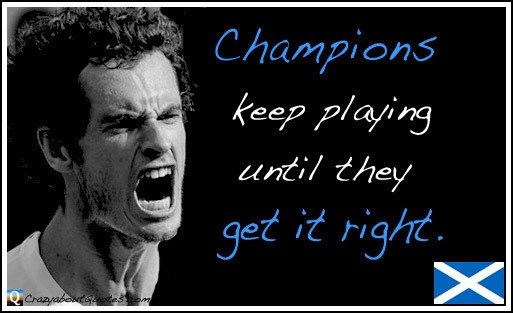