Motivational James Allen Quotes
- author of As a Man Thinketh

Many of these James Allen quotes are taken from his classic As a Man Thinketh. A short and easy to read book that contains so many truths. These motivational words of positivity have the power to change your thoughts and life. 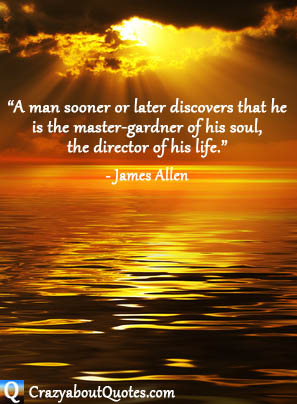 Profile: James Allen was born into a working-class family in Leicester, England, in 1864. His father, finding himself out of work, left for America in 1879 with plans to find a place for his family to settle. But within a short period of time he was robbed and murdered.

This forced James to leave school and look for work at 15. He worked for various British manufacturers as a private secretary and married in 1895.

In 1898 Allen started to write for a magazine which triggered a creative period in his life. He published his first book From Poverty to Power in 1901, then began to publish his own spiritually based magazine.

In 1903 James Allen published his third and most famous book As a Man Thinketh. Around this time he retired to Ilfracombe on the coast where he continued to write until his death in 1912.

"The greatest achievement was at first and for a time a dream.
The oak sleeps in the acorn, the bird waits in the egg,
and in the highest vision of the soul a waking angel stirs.
Dreams are the seedlings of realities."

"All that you accomplish or fail to accomplish with your life
is the direct result of your thoughts."

"A man sooner or later discovers that he
is the master-gardner of his soul,
the director of his life.

"A man is literally what he thinks."

"Above all be of single aim; have a legitimate and useful purpose,
and devote yourself unreservedly to it."

"Whether you be man or women
you will never do anything in this world without courage.
It is the greatest quality of the mind next to honour."

"The more tranquil a man becomes,
the greater is his success, his influence, his power for good.
Calmness of mind is one of the beautiful jewels of wisdom."


This next beautiful James Allen quote
will sooth your very soul just reading it.
Take the time to meditate on these perfectly crafted words of wisdom.

Take a 'Look Inside' James' work on Amazon...