Napoleon is the author of Think and Grow Rich, which in my opinion is one of 'The' must have books on success and personal growth. I hope you enjoy this brief profile and collection of Napoleon Hill quotes that will fuel your mind for success. 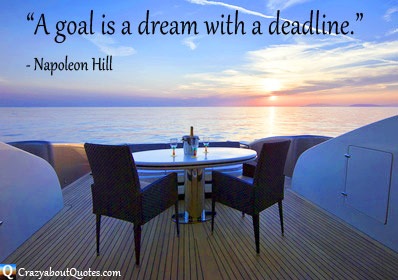 Profile: Born 1883 in the Appalachian town of Pound, South West Virginia, his mother died when he was 10. He began work at 13 for a small town newspaper and used his earnings to enter law school but had to withdraw for financial reasons.

The turning point in his life came when he interviewed Andrew Carnegie as part of an assignment. Carnegie believed success could be outlined in a simple formula, and being impressed with Napoleon Hill, challenged him to interview over 500 successful men and women to find such a formula and have it published.

This culminated in the publishing of Think and Grow Rich

which has went on to sell over 20 million copies world wide.

Napoleon Hill was also an advisor to two presidents, Woodrow Wilson and Franklin D Roosevelt. He died 1970 in South Carolina.

"Riches begin in the form of thought! The amount is limited only
by the person in whose mind the thought is put into motion.
Faith removes limitations!
Remember this when you are ready to bargain with life
for whatever it is that you ask as your price for having passed this way."


"A goal is a dream with a deadline."

"Cherish your visions and your dreams
as they are the children of your soul,
the blueprints of your ultimate achievements."

"Edison failed 10,000 times before he made the electric light.
Do not be discouraged if you fail a few times."

"Don't wait. The time will never be just right."

"Mind control is the result of self-discipline and habit.
You either control your mind or it controls you."

"You are the master of your own earthly destiny just as surely as you have the power to control your own thoughts."

"The very fact that the subconscious mind
is the medium of communication between the
thinking mind of man and Infinite Intelligence is, of itself,
a thought which almost paralyses one's reason."

"The starting point of all achievement is desire."

"Reduce your plan to writing.
The moment you complete this,
you will have definitely given concrete form to the intangible desire."

I hope you enjoyed these Napoleon Hill quotes, most have been taken from his highly successful book Think and Grow Rich, which contains 13 principles on how to accumulate riches.

Over 20 years of research went into this book. It is a complete philosophy for success, of course riches cannot always be measured in money, but I find myself coming back to this book frequently for inspiration.

Take a 'Look Inside' Napoleon's Work on Amazon...

More quotes on thinking your way to success...