As a blogger, motivational speaker, and author, Steve Pavlina has quite a following. Here's a Top 10 list of the best Steve Pavlina quotes. 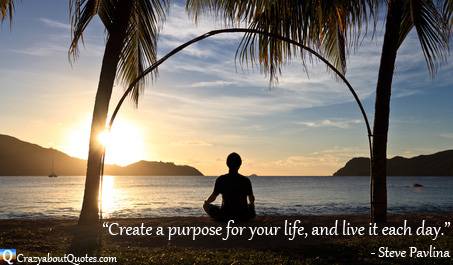 Profile: Steve Pavlina was born in 1971, by 1991 he had got expelled from college and was arrested for grand theft. His arrest was the trigger to make some changes in his life. He got heavily into personal development, listening to audio programs and going on to read over 1,000 books.

Steve went back to college then started a computer games business, running it for 10 years. Realising his new found knowledge in personal development and the benefits he had received from it he began to write articles on-line.

In 2004 he launched Stevepavlina.com and it quickly became very popular. He went on to write Personal Development for Smart People in 2008 and has written over 1,000 articles which he donated to the public domain.

"The more disciplined you become, the easier life gets."

"Passion and purpose go hand in hand.
When you discover your purpose, you will normally find
it's something you're tremendously passionate about."

"Being normal is a myth. There's no such thing."

"Creating a sustainable lifestyle that you enjoy and
that serves others is an achievable goal -
if you're willing to maintain a long time perspective and stick with it."

"The ultimate goal of living your values
is to eventually bring them into alignment with universal principles."

"If you want to get better at anything, do that specific activity - a lot.
Don't just read about it or talk about it. Do it."

"Don't die without embracing the daring adventure
your life is meant to be."

Take a 'Look Inside' Steve's Work on Amazon...