A Top 10 collection of Thomas Edison quotes and some background information. 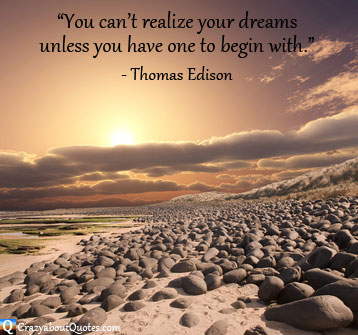 Profile: Thomas Alva Edison was born Feb 11th 1847 in Milan, Ohio. He had virtually no schooling but was taught by his mother, and by age 12 he was unwittingly honing his entrepreneurial skills selling newspapers and sweets to train passengers.

Edison suffered from partial deafness for most of his life. Around 1862 he saved a child from being run over by a train and the father being so grateful trained Edison as a telegraph operator.

Thomas Edison was inventing from as early as 1864, the money he received from his quadruplex telegraph was used to set up his own laboratory dedicated to inventing. It was here that he brought to the worlds attention the phonograph and the incandescent lightbulb which lead to electric-power stations. Later Edison and his team developed the first motion picture camera and went on to produce many movies.

Thomas Edison worked into his 80s and died in 1931. He was a prolific inventor and entrepreneur whose vision and perseverance changed the world we live in. I'm sure you will enjoy these Thomas Edison quotes, here we go.

"Discontent is the first necessity of progress."

"If we all did the things we are capable of doing,
we would literally astound ourselves."

"You can't realize your dreams
unless you have one to begin with."

"Nearly every man who develops an idea works at it up to the point
where it looks impossible, and gets discouraged.
That's not the place to become discouraged."

"Genius is one percent inspiration and ninety-nine percent perspiration."

"Our greatest weakness lies in giving up.
The most certain way to succeed is always to try just one more time."

"Good fortune is what happens when opportunity meets with planning."

"I know this world is ruled by infinite intelligence.
Everything that surrounds us, everything that exists,
proves that there are infinite laws behind it.
There can be no denying this fact.
It is mathematical in its precision."