A Top 10 list and more, of Christian quotes to inspire you in your journey of faith. 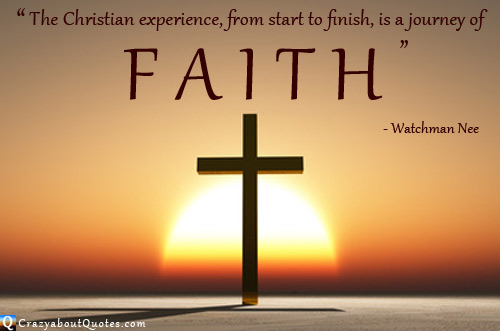 A Top 10 of
Inspirational Christian Quotes

"Christianity helps us face the music even when we don't like the tune."

"The Christian life is not a constant high.
I have my moments of deep discouragement.
I have to go to God in prayer with tears in my eyes,
and say, 'O God, forgive me,' or 'Help

"Would to God we were all Christians who profess to be Christians,
and that we lived up to what we profess.
Then would the Christian shine forth "clear as the sun, fair as the moon,
and what besides - why, "amazing as an army with banners!"
A consistent Church is an amazing Church -
an honest, upright Church would shake the world!"

"Be united with other Christians.
A wall with loose bricks is not good.
The bricks must be cemented together."

"It is our privilege to know that we are saved."

"A Christian has no right being in a fight unless it's a spiritual fight."

"To be a Christian without prayer is no more possible
than to be alive without breathing."

"The Christian missionary may preach the gospel to the poor naked heathen,
but the spiritual heathen who populate Europe
have as yet heard nothing of Christianity."

"For the Christian, heaven is where Jesus is.
We do not need to speculate on what heaven will be like.
It is enough to know that we will be for ever with Him."

"Going to church doesn't make you a Christian
any more than going to a garage makes you an automobile."

"Most Christians seem to have two kinds of lives,
their so-called real life and their so-called religious one.
Not (C. S.) Lewis.
The barrier so many of us find between the visible
and the invisible world was just not there for him.
It had become natural for Lewis to live ordinary life in a supernatural way."

"Christianity is not a religion or a philosophy,
but a relationship and a lifestyle.
The core of that lifestyle is thinking of others, as Jesus did,
instead of ourselves."

"Christianity certainly involves hardship and discipline.
But it is founded on the solid rock of old fashioned happiness.
Jesus is in the happiness business."