There is much wisdom and inspiration to be gained from this great philosopher and psychologist. Enjoy this Top 10 list of quotes by William James. The picture quote from the home page is worth repeating I think, as it's one of my favourites...

"The greatest discovery of my generation is that a human being
can alter his life by altering his attitudes of mind.
As you think so shall you be." 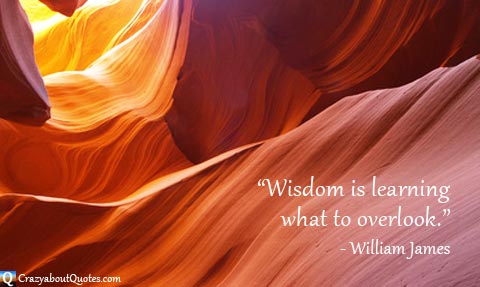 Profile: William James was born in 1842 into a wealthy family in New York. They took many lengthy trips to Europe which greatly influenced James's life and that of his brother Henry who became a novelist.

James was interested in painting but went to Harvard where he obtained a degree in medicine in 1869. However he suffered from ill health during this time, which included depression. It was only through his philosophical searching that he decided that only he could make himself whole through his own willpower. William James believed in "The Will to Believe".

James acquired a position at Harvard as a teacher in 1872 and was drawn to psychology and philosophy becoming a full professor by 1885. However it was the publishing of Principles of Psychology (nearly twelve years in the making) in 1890 that he received worldwide recognition.

William James wrote prolifically throughout his life particularly on pragmatism. He believed if an idea can be observed to make a difference in your life, a belief in God for example, then it has worth.

William James died in 1910 a highly respected philosopher and pioneer of psychology. Don't miss the link to motivational quotes by William James at the bottom of this page. In the meantime enjoy these words of wisdom that come served with a bite of the right attitude.

"If you believe that feeling bad or worrying long enough
will change a past or future event, then you
are residing on another planet with a different reality system."

"If you want a quality, act as if you already have it."

"Of all the creatures on earth,
only human beings can change their patterns.
Man alone is the architect of his destiny…
Human beings, by changing the inner attitudes of their minds,
can change the outer aspects of their lives."

"Wisdom is learning what to overlook."

"If any organism fails to fulfil its potentialities, it becomes sick."

"When you're in conflict with someone,
there is one factor that can make the difference
between damaging your relationship and deepening it.
That factor is attitude.

"The greatest weapon against stress
is our ability to choose one thought over another."

"The world we see that seems so insane is the result of a belief system
that is not working. To perceive the world differently,
we must be willing to change our belief system,
let the past slip away, expand our sense of now,
and dissolve the fear in our minds."


This next William James quote is undoubtedly worth highlighting. I doubt there is a single person alive that hasn't felt very low at some point in their life. But persevere with the right positive attitude and it will pass. Worth repeating. And it will pass.