A collection of inspirational C.S. Lewis quotes for your enjoyment. 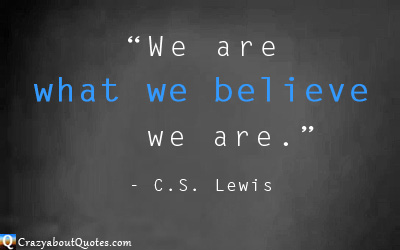 Clive Staples Lewis was born in Belfast, N. Ireland in 1898.

Whilst best known for The Chronicles of Narnia series of children's books, first of which was the much loved The Lion, the Witch and the Wardrobe, he was also a respected scholar and writer of Christian literature

For nearly two decades Lewis met with friends, which included J.R.R. Tolkien, in Oxford every week to discuss literature and life.

This meeting of fine minds was most definitely a contributing factor in Lewis' and other members of the groups success. Tolkien was also a major influence in C.S. Lewis' conversion from atheism to Christianity.

"You are never too old to set another goal
or to dream a new dream."

"Courage is not simply one of the virtues,
but the form of every virtue at the testing point."

"Failures are finger posts on the road to achievement."

"Aim at heaven and you will get earth thrown in.
Aim at earth and you get neither."

"Affection is responsible for nine-tenths of
whatever solid and durable happiness there is in our lives."

"Some people feel guilty about their anxieties
and regard them as a defect of faith
but they are afflictions, not sins.
Like all afflictions, they are, if we can so take them,
our share in the passion of Christ."

"Experience: that most brutal of teachers.
But you learn, my God do you learn."

"Has this world been so kind to you that you should leave with regret?
There are better things ahead than any we leave behind."

"You can not get a cup of tea big enough
or a book long enough to suit me."

"What saves a man is to take a step.
Then another step."

Take a 'Look Inside' Lewis' Work on Amazon...

Return to Quotes by Famous People
from C.S. Lewis quotes