A collection of motivational Wallace Wattles quotes for your enjoyment. 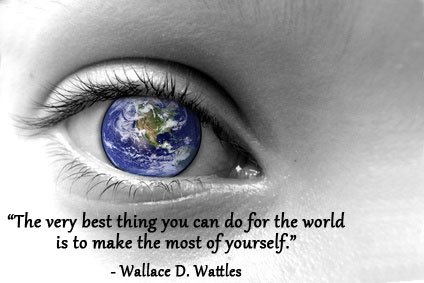 Profile: Wallace D. Wattles was born into a poor family in Illinois in 1860. He did not have much formal education and was working as a farm labourer by 1880.

Not a great deal is known about his life really, but in 1896 according to his daughter Florence he travelled to Chicago where there was a "convention of reformers". Wattles was drawn to this "wonderful social message of Jesus".

Around this time Wattles also studied the beliefs and philosophies of others like Hegel, Descartes and Emerson. And it seems that through these studies he claimed to have found the truth of the New Thought principles.

Wattles practiced these principles in his own life. He used his imagination to visualise his career and become the man he wanted to be. Practising gratitude was another important part of his principles.

Wallace D. Wattles died in 1911, he wrote several books but is best known for The Science of Getting Rich published in 1910. This book has been a source of inspiration to many authors since. Rhonda Byrne who created the film and book The Secret being one.

"You must form a clear and definite mental picture of what you want.
You can not transmit an idea unless you have it yourself."

"The grateful mind is constantly fixed upon the best.
Therefore, it tends to be become the best;
it takes the form or character of the best and will receive the best."

"The very best thing you can do for the world
is to make the most of yourself."

"Riches secured on the competitive plane
are never satisfactory and permanent.
They are yours today and another's tomorrow."

"Do all that you can do in a perfect manner every day,
but do it without haste, worry or fear.
Go as fast as you can, but never hurry."

"Whenever you find yourself hurrying, stop.
Fix your attention on the mental image of the thing you want
and begin to give thanks that you are getting it."

"By thought, the thing you want is brought to you.
By action, you receive it."

"There is no labour from which most people shrink
as they do from that of sustained and consecutive thought;
it is the hardest work in the world."

"The more gratefully we fix our minds on the Supreme
when good things come to us, the more good things we will receive,
and the more rapidly they will come; and the reason simply is
that the mental attitude of gratitude draws the mind into closer touch
with the source from which the blessings come."

"The human being lives, moves and has his being in a limitless ocean of health-power, and he uses this power according to his faith."

Take a 'Look Inside' Wallace's Work on Amazon...

"Give every man more in use value
than you take from him in cash value;
then you are adding to the life of the world
by every business transaction."

Thanks for visiting
this Wallace Wattles Quotes page

For more quotes on the power of our thoughts check out...