I hope you enjoy this collection of Alexander Graham Bell quotes. Alexander is of course credited with inventing the telephone, and his discovery was born from his desire to help deaf people. 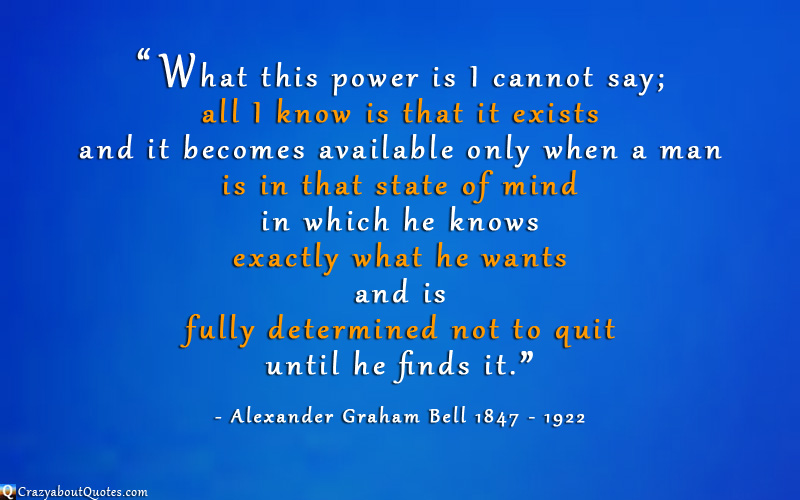 From an early age he displayed a curiosity that led him to his first invention at the age of 12.

Around this age his mother gradually began to lose her hearing, this had a huge effect on Alexander. His family was already known for their work in elocution and speech and so he spent much of his early life experimenting with sound.

Alexander also married Mabel Gardiner Hubbard who was deaf and he was friends with the inspirational Helen Keller.

It was in 1876, age 29, that Alexander invented his telephone and formed the Bell Telephone Company the next year.

Although his future was secure he still sought out new ideas and explored other scientific areas including airplanes, sheep-breeding, artificial respiration, water distillation, and hydrofoils.

"Concentrate all your thoughts upon the work at hand.
The sun's rays do not burn until brought to a focus.

"What this power is I cannot say;
all I know is that it exists and it becomes available
only when a man is in that state of mind
in which he knows exactly what he wants
and is fully determined not to quit until he finds it."

"Sometimes we stare so long at a door that is closing
that we see too late the one that is open."

"Self-education is a life-long affair.
There cannot be mental atrophy in any person
who continues to observe, to remember what he observes,
and to seek answers for his unceasing hows and whys about things."

"Before anything else, preparation is the key to success."

"In scientific researches, there are no unsuccessful experiments;
every experiment contains a lesson.
If we don’t get the results anticipated and stop right there,
it is the man that is unsuccessful, not the experiment."

"A man, as a general rule, owes very little to what he is born with
- a man is what he makes of himself."

"We are all too much inclined, I think,
to walk through life with our eyes closed...
We should not keep forever on the public road,
going only where others have gone;
we should leave the beaten track occasionally and enter the woods."

"God has strewn our paths with wonders,
and we shall certainly not go through Life with our eyes shut."

"Great discoveries and improvements invariably
involve the cooperation of many minds.
I may be given credit for having blazed the trail,
but when I look at the subsequent developments
I feel the credit is due to others rather than to myself."

"The inventor is a man who looks around upon the world
and is not contented with things as they are.
He wants to improve whatever he sees,
he wants to benefit the world;
he is haunted by an idea.
The spirit of invention possesses him, seeking materialization."

"The nation that secures control of the air will ultimately rule the world."

"The day will come when the man at the telephone
will be able to see the distant person to whom he is speaking."

"One discovery will lead to another,
and before you know it you will have something
worth thinking about to occupy your mind,
for all really big discoveries are the results of thought."