This is a collection of Charles Haanel quotes. Firstly just on a personal note, I would have to say Haanel's Master Key System is probably my No.1 favourite motivational book at this moment.

Charles was a man way ahead of his time, the Master Key System is full of practical and motivational material on how we can harness the power of our thoughts and change our lives. 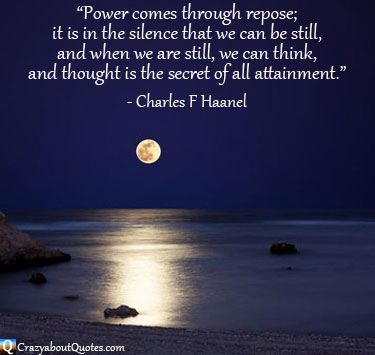 Profile: Charles F Haanel was born 1866 in Arbor, Michigan, his first full-time job was as an office boy in the National Enamelling and Stamping Company and he worked there for 15 years.

Charles left the company to set up his own business, CF Haanel Publishing Company, and went on to be president of several other companies.

Not much is known about what his influences were, but in 1912, at the age of 46, he published the Master Key System, which is the reason he is considered by some to be 'the father of personal development'. Charles Haanel went on to write four more books.

Napoleon Hill once wrote him a letter in 1919 thanking him for the Master Key System, saying it contributed to his success. Charles died in 1949 age 83 and is buried in Bellefontaine cemetery.

"It is evident, therefore,
that all we have to do is let our light shine;
the more energy we can radiate;
the more rapidly shall we be enabled to transmute undesirable conditions
into sources of pleasure and profit."

"Power comes through repose;
it is in the silence that we cam be still,
and when we are still, we can think,
and thought is the secret of all attainment."

"Imagination is the light by which we can penetrate
new worlds of thought and experience."

"By far the greatest discovery of all the centuries
is the power of thought."

"It is the combination of thought and love
which forms the irresistible force, called the law of attraction."

"Intuition usually comes in the silence;
great minds seek solitude frequently;
it is here that all the larger problems of life are worked out."

All these Charles Haanel quotes are taken from his book the Master Key System, which was written over 100 years ago! This has been a source of inspiration to many of the motivational authors that came after, Napoleon Hill being the most prominent.

I hope you enjoyed these Charles Haanel quotes.

'Look Inside' Haanel's Work on Amazon...